Supporting startup entrepreneurs from priority districts targeted by Montpellier city policy. That’s the goal of the “Entrepreneurship for All Bus,” a Bpifrance initiative involving Montpellier Métropole and the city of Montpellier.

Launch organized as part of the Bpifrance Entrepreneurship Tour in Montpellier

What’s the best way to reach project leaders from priority districts with solutions that will help them create their company? By going out in the field to meet them.

That is why Montpellier Méditerranée Métropole and the city of Montpellier decided to help fund the Entrepreneurship for All Bus, an experiment initiated by Bpifrance, which tasked implementation to associations operating in each of the nine territories in France where the operation is being conducted over three years.

In Montpellier, the Entrepreneurship for All Bus is spearheaded by Initiative Montpellier Pic Saint-Loup (IMPSL). But, as in other regions, the program also involves all the organizations and services supporting company creation assistance and economic inclusion via the economy. One particular feature for the Montpellier Métropole area is that the bus will not just drive around Montpellier’s priority districts targeted by city policy. It will also visit other districts and, within the next year, start making rounds in other cities in the metropolis.

Launched on November 25 in Montpellier, the program was officially presented on December 3 at Montpellier’s City Hall during the Entrepreneurship for All Tour, featuring the presence of all involved associations and organizations with booths and workshops, including Montpellier BIC, French Tech Méditerranée, IMEIF, Moovjee, France Active Airdie-Occitanie, ADIE, and Les Déterminés.

The idea is simple: the roving bus makes half-day stops at various locations, each time involving merchants and representatives from local associations, in addition to company creation partners.

“We go out to meet people who do not necessarily have access to the information they need to move their project forward,” explains Loris El Ahmar, project manager for the Entrepreneurship for All bus.

The goal is to provide advice and assistance, referrals to business creation partners, easier access to funding solutions, workshops, testimonials, encounters, events, training, and sponsorship. Appointments may be made ahead of time, which is easy because a schedule of upcoming rounds lets people know when the bus will be in their area.

Even though it just began, the experiment has already demonstrated its success. During its very first rounds, the bus welcomed about sixty people, which led to assistance being provided for about fifteen project leaders with a variety of business activities, “from cleaning to restaurants,” adds Loris El Ahmar. 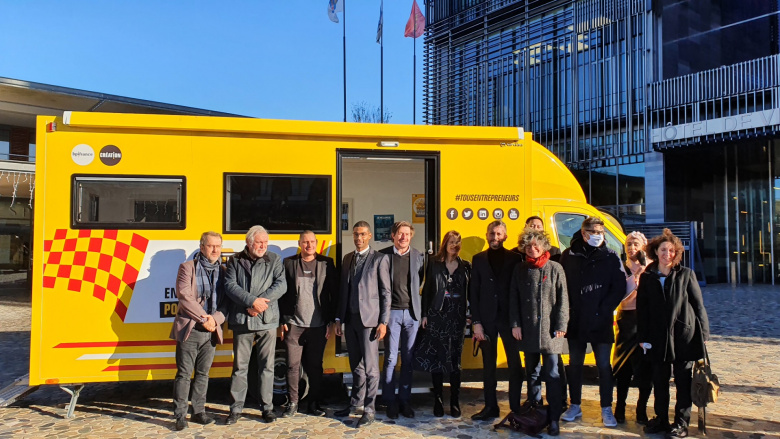 The city’s priority districts are rich with creative energy. Testimonials clearly demonstrated this fact during the December 3 rounds, such as that of Sadia Sabbani, creator of the J’aime Ma Crêpe restaurant in Montpellier. The association Axents that assisted her introduced her to the support services provided by IMPSL, BGE Montpellier Cœur d’Hérault, and Airdie.

“I was able to launch my project thanks to them. A startup founder really needs to get good advice in order to know whether the project can be fine-tuned to become viable, and also to know where to turn to get it off the ground,” she highlights.

Her point of view is shared by Brice-Stéphane Soumé et Kevin Mahoungou, creators of the startup Ibissa, which produces 100% natural hibiscus flower tea.

With their company set up in Montpellier’s Saint Martin district, the two founders now want to create their own production line, as early sales were promising.

Creating an innovative company in an underprivileged district is possible! That is exactly what Montpellier BIC and French Tech Méditerranée demonstrated. Today, there are programs such as French Tech Tremplin (trampoline) that enables project leaders with projects outside the hi-tech world to benefit from incubator assistance (such as Montpellier BIC), funding to start their business, and access to the French Tech network. “Applications for the next group are being accepted until January 2, 2022!” reminds Isabelle Prévot, Director of Montpellier BIC. 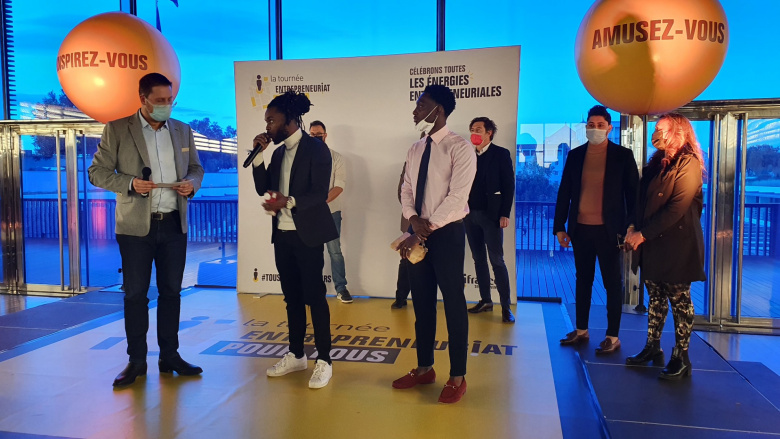 During the event, CitésLab and BGE Montpellier Cœur d’Hérault also revealed the winners of the Montpellier Neighborhood Talents 2021 competition.

Ehab Khabbaz received an award for his restaurant (bearing his own name); Astghik Mallado for creating À la Paella Valenciana in Montpellier’s Halles Jacques-Cœur; Salih Abdoun for AS Carrosserie Auto created in Vendargues; Julia Valette for her translation services; and Hana Ahidar for BY T&I, specialized in creating personalized objects. 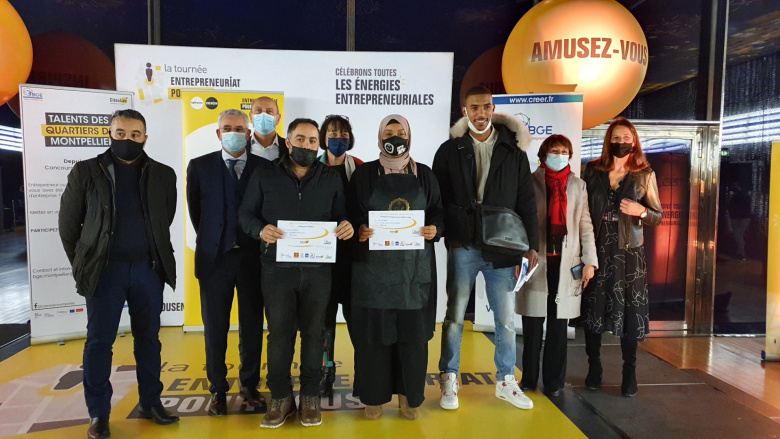 A business and job cooperative is being created in the La Mosson district. “The Shake Mama cooperative will specialize in textiles and restaurant services,” announced Soraya Rahal, Director of IMEIF. 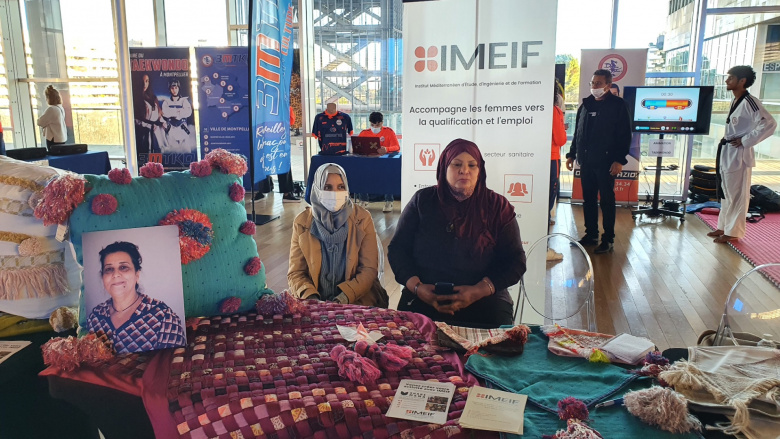 Catch up on highlights from the tour